Saving Us From Ourselves: Harnessing the Power of CAR-T to Combat Autoimmunity

Thus far, more than 80 different autoimmune diseases have been identified, with some of the most prevalent including rheumatoid arthritis, Crohn’s disease, type 1 diabetes, and multiple sclerosis [1]. Autoimmune disease is one of the top ten causes of death in women under the age of 65 and is the second highest cause of chronic illness in America [2]. These diseases are often life-limiting, debilitating, and if left untreated can become life threatening. Current estimates indicate that roughly 50 million people in the United States are afflicted with an autoimmune disease and this represents a substantial economic burden in this country costing more than $100 billion dollars in annual healthcare costs [3]. And unlike other conditions such as cancer, there is currently no cure for autoimmune disease and treatment options are very limited. 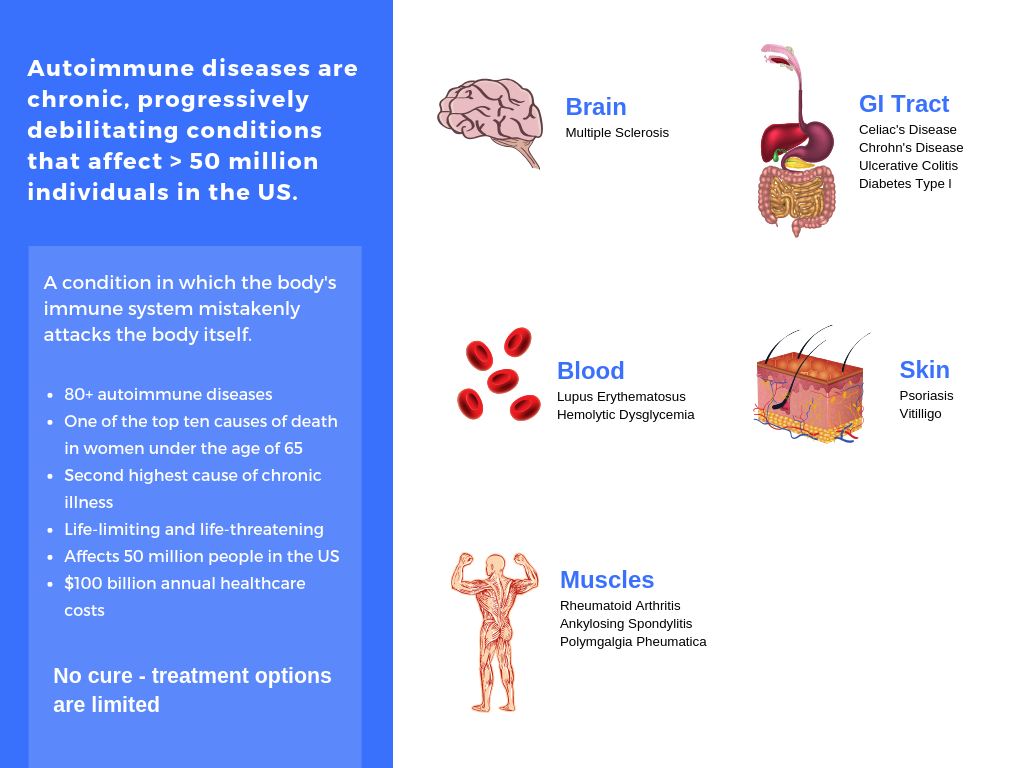 Since their inception, chimeric antigen receptor T-cell (CAR-T) therapies have undergone extensive study and refinement. The potential of these therapies was realized in 2017 when two CAR-T cell therapies, Yescarta (TM) and Kymriah (TM), were approved for clinical use to treat CD19+ B-cell lymphoma [3]. The knowledge gained and lessons learned in the development of these therapies has helped define the potential of CAR-T and it is now clear these cells have clinical relevance far beyond cancer therapy [4,5].

The prevalence of autoimmune diseases is on the rise [7-9]. Modern hygiene and disinfection practices have reduced our interactions with microorganisms which are critical for teaching our immune system the difference between foreign and self to prevent autoimmune reactions [9]. Because hygiene standards are unlikely to change anytime soon, the global market for autoimmune therapies is predicted to reach $153.32 billion by 2025.10 Current treatments for autoimmune diseases are immunomodulating or anti-inflammatory small molecules or proteins designed to help reduce symptoms [11–13]. While these options do provide relief for many patients, they have significant limitations including treatment resistance, continuous administration requirements, and significant side effects [11–15] For many autoimmune conditions such as multiple sclerosis, treatments are unable to prevent the inevitable disease progression leaving those suffering in dire need of a better solution [16]. Due to the significant role of T-cells in autoimmunity, CAR-T based approaches for these ailments have the potential to deliver solutions which can provide long term benefit for patients in the form of symptom reduction, tissue repair, and perhaps a cure [5,6,14,17].

T-cell biology is complex, but two classes of T-cells seem to stand out for their potential in autoimmune CAR-T therapies. Effector T-cells (Teff) are responsible for defending our body against pathogens and cancer [6]. They do this by directly killing foreign or defective cells and releasing inflammatory factors [18,19]. On the other hand, regulatory T-cells (Treg) are responsible for suppressing an immune response to minimize harm to self. This is achieved by releasing immunosuppressive cytokines and the suppression of autoreactive immune cell populations [5,6,17,19]. When this system functions properly, it allows the body to provide a strong defense against foreign challengers while minimizing the damage to self. However, an imbalance of one of these subsets can cause or accelerate disease [17,10]. In the case of many autoimmune conditions, the balance tips in favor of Teff cells and leads to the production of inflammation and autoantibodies [14,17].

Currently, two strategies are the frontrunners for autoimmune CAR-Ts. The first involves a strategy similar to how clinically approved CAR-T therapies function. Teff cells are engineered to possess a chimeric antigen receptor (CAR) with an extracellular component that resembles the self-antigen that the autoantibodies bind to. This allows these CAR-T cells to identify and destroy B-cells producing harmful autoantibodies [6,14]. This efficacy of this approach has been tested in preclinical animal models and shown tremendous benefit for a number of autoimmune diseases including pemphigus vulgaris [19] and lupus [14,22] and has progressed to a Phase I clinical trial (NCT03030976). Due to its similarity to clinically approved CAR-T therapies, this strategy will likely be the first to make it to market. However, these cells may carry similar risks of cytokine release syndrome and neurotoxicity or therapeutic exhaustion over time which may limit their use [6]. 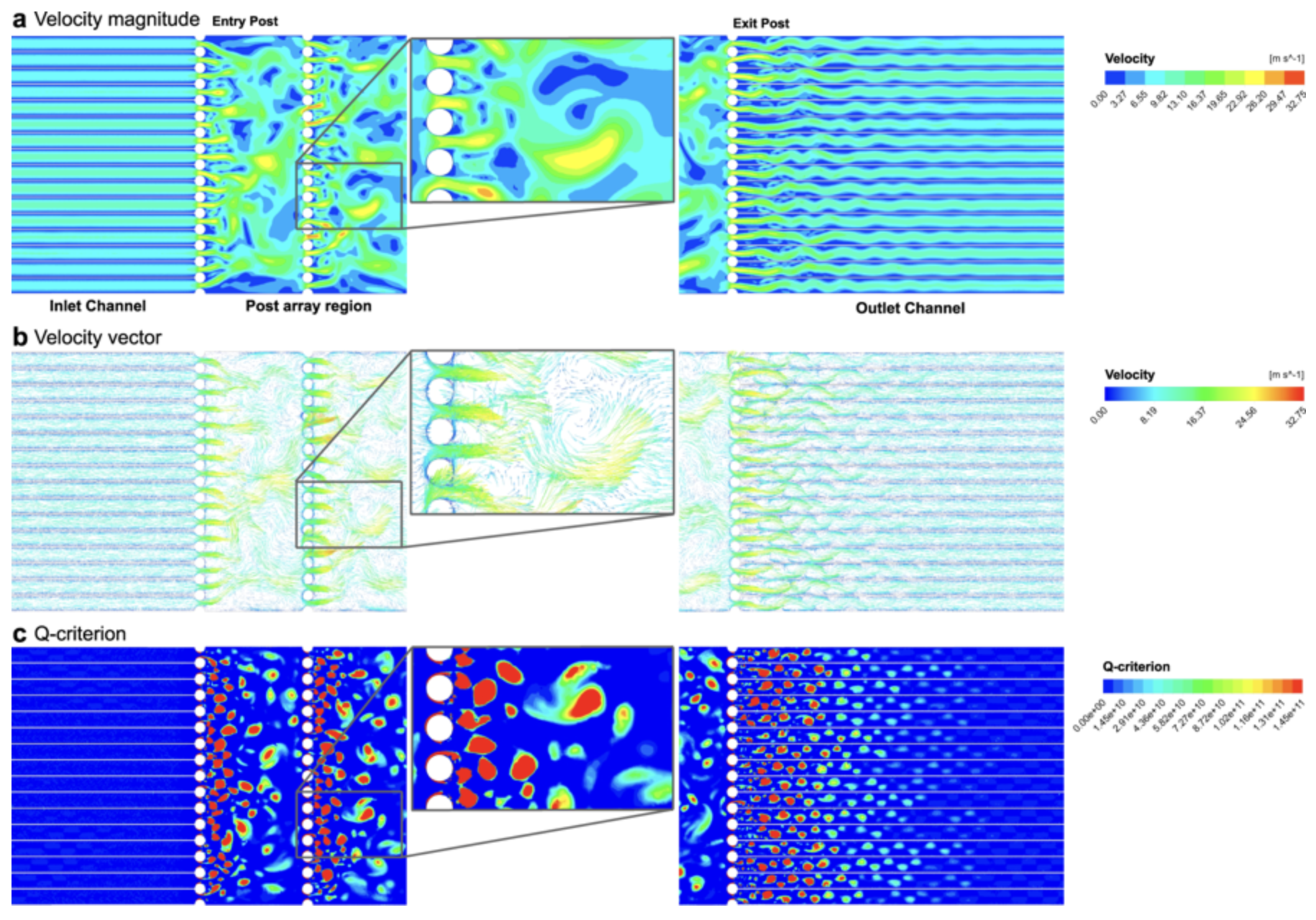 The second strategy utilizes the immune suppressive nature of Treg cells to control the activity of the immune system at the sight of the autoimmune reaction [5]. In this case, CARs are designed to target antigens that are present in the tissue currently under attack [6]. The CAR allows the Treg cells to home in on the tissue of interest and release a milieu of anti-inflammatory and immunosuppressive factors resulting in a targeted suppressive effect which ameliorates symptoms, promotes long-term tolerance, and stimulates tissue repair [5,6]. This approach has been shown significant promise in animal models for colitis [23,24] multiple sclerosis, [25] and graft versus host disease [26]. The use of Treg cells is less likely to induce severe side effects seen with Teff cells, however, the use of Treg cells comes with some drawbacks [6]. Treg cells only make up 1-2% of the lymphocytes in the blood making isolation of pure populations in sufficient numbers incredibly challenging [5,6]. In addition, Treg cells have the potential to convert to Teff cells in areas of inflammation.6 If this occurs, it is possible that the CAR receptor on these cells could cause them to attack the tissue which could increase inflammation and accelerate disease progression [6]. This issue can potentially be solved with more advanced strategies such as inclusion of a suicide gene which kills the cell upon losing expression of FOXP3, a regulator of Treg autoimmunity function [6]. Additionally, while the effects of off-target CAR activation for these cells is not as severe as Teff cells, it is thought that accumulation of these cells in areas of healthy tissue may help shift a tissue environment in a direction that is supportive of cancer formation and pathogen survival [6].
One of the biggest hurdles facing autoimmune CAR-T therapy is the establishment of a production strategy allowing for robust gene transfer and expression in a non-viral manner [27]. Our gene delivery hardware provides an excellent solution to this problem by employing microfluidic vortex shedding (µVS). In a recent study published in Nature Scientific Reports, our device was shown to transfect human T-cells at a rapidly (2 million cells per sec) with a 1 kb mRNA construct with high efficiency (63.6 ± 3.44%) while maintaining high viability (77.3 ± 0.58%) and recovery (88.7 ± 3.21%) of the transfected cells [28]. These results indicate that µVS overcomes many of the critical challenges currently faced by electroporation or viral-based transfection [28]. For Teff cell-based methods, it is critical that gene transfer does not cause premature cell exhaustion to assure the cell infusion can impart long-term killing of autoreactive B-cells [29]. Transfection with µVS was shown to have no effect on growth or critical T-cell activation markers or cytokine excretion demonstrating that the system did not alter the normal cell function after transfection [28]. The potential of Treg cell-based utility is currently hindered by the relative rarity of Treg cells in the blood (1 to 2% of peripheral blood lymphocytes) [5,6]. Indee Labs µVS system will maximize the number CAR-Treg cells that can be produced for each patient through high yield processing (i.e. cell recovery, cell viability and modification efficiency). µVS will also permit more rapid expansion of CAR-Treg cells with less perturbation decreasing the consequences of over-expansion such as Treg destabilization [5]. We are excited by the potential µVS holds to help overcome some of the challenges faced in CAR-T manufacturing and believe that it will help accelerate the transition of CAR-T therapies into areas far beyond what it was originally envisioned for.

Michael A. Evans, BSci MSci is a bioengineering Ph.D. candidate at Harvard University with 7 years of experience in immunology, cell therapies, drug delivery, and organic chemistry. His current research focuses on using macrophages as carriers for nanoparticles to improve their targeting towards inflamed tissues. He is an author of 4 peer reviewed publications with three more in press. He attended Furman University and the University of California Santa Barbara (UCSB), where he received a B.S. and M.S. in chemistry, respectively. He received the 2014 John Sampey Award for the Chemical Sciences and was a 2017 UCSB New Venture Competition Finalist and the People’s Choice Award recipient. Michael will be finishing his PhD in late 2019 and is excited to begin his career in gene-modified cell therapy.

Sign up with your email address to receive news and updates.